Patrick Javillier, aka "The King of Meursault", trained as an electrical engineer before studying oenology at the University of Dijon, alma mater of so many great Burgundian winemakers, and taking over the family domaine in the mid 70’s. The Javilliers have been involved in the Burgundy business for generations beginning as courtiers and, after acquiring a few hectares of vines, domaine owners. Today, the orginal 3 hectares of vines have grown to 9.5 hectares and the Domaine Javillier has become one of the

elite addresses in the Côte d’Or. According to a recent Clive Coates article,  Javillier is one of the top ten Burgundy domaines of all time along with the likes of fellow Meursault producer Comtes Lafon and more well known legends like Armand Rousseau and Roumier. Impressive company. Especially for a producer with no great vineyards save for a bit of Corton-Charlemagne. This domaine should be on your radar as a great source of top level Burgundy, especially for this cuvée; a perennial best value in white Burgundy.

The Cuvée des Forgets is sourced from a 2.25 hectare plot in the Bourgogne blanc appellation on the Volnay side, or north, of Meursault where the chalky limestone gives way to deeper, alluvial soils. This is excellent Meursault in all but name (or price!) This cuvée is made the same way as the upper level Meursaults in the cellar with aging in a mix of old and new barrique, batonnage etc., traditional techniques which bring out the extraordinary complexity that Chardonnay is capable of achieving in the right hands. The 2010 vintage was a particularly fine one for Meursault yielding wines with up front aromatics and dense, fleshy texture with plenty of supporting acidity. A lot like 2008 but just a little more perfect in my mind. The Cuvée des Forgets 2010 fits this profile with pretty notes of white flowers, stone fruit, green apple and a bit of toasty oak followed by a generously textured mid palate and a firm, mineral and acid finish. Easy enough to open on delivery but one of the most rewarding white Burgundy’s in this price range to lay down for a few years.

If someone in Castagnole Monferrato offers you a glass of Ruchè, it’s because he or she is pleased to have you there. Or so says the road sign you’ll see on the way into this quaint village. You’ll also see a big sign on the way in that says CUORE DEL RUCHÈ (heart of Ruché) in big red letters on a concrete retaining wall. This rural paradise is also the heart of agnolotti and truffles which makes this place a real destination. At least for me. Ruchè (roo-kay), one of 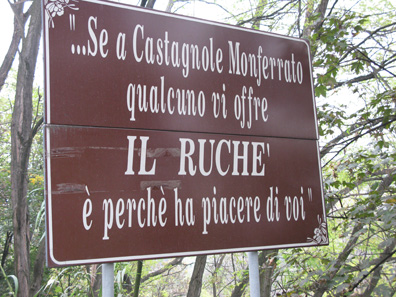 hundreds of Italian varietals you’re not likely to have heard of let alone tasted, is synonymous with this tiny village in the hills just outside of Asti and one of Piedmont’s real treasures. There are just 75 hectares of this grape planted in Italy, all jn the Monferrato hills in Asti and Alessandria provinces in the southeast of the region (if you’ve ever taken the A21 freeway from one of Milan’s airports towards Turin, Asti or the Langhe, you’ve driven through here.) Just 40 of those hectares are qualified for production of DOCG Ruché making this a micro zone, perhaps Italy’s smallest. Indeed, not much of this wine manages to escape local consumption so it’s not exactly a staple of Italian wine lists or shops here in the US. There are a few producers making serious examples of this wine however and they’re absolutely worth your regard. In my mind the top three are Luca Ferraris, Montalbera and this one from Crivelli.

You’re probably familiar with the local classics from this zone; Nebbiolo, Barbera and Dolcetto from the Langhe and environs and maybe even exotics like Pelaverga and Freisa, both suspected relatives of Nebbiolo. Ruché is a bit more mysterious. It’s name and origins aren’t very well understood and considering its ghostlike  status, it’s not surprising that almost nothing has been written about it in the mainstream wine press. I couldn’t find even a mention of either Ruché or Monferrato in Sheldon Wasserman’s otherwise dizzyingly comprehensive magnum opus Italy’s Noble Red Wines . This can be serious stuff. Pretty floral aromatics and firm structure with rich fruit. It’s about time to take a closer look at this compelling wine.

The Crivelli estate, created by Marco Crivelli from vineyards that his family had been supplying the local co-op with since the turn of the last century, is now being run by Marco and son Jonathan. Sustainable farming practices and low

yields, as always, create the foundation for great wine and that’s the model here. If I were to use one word to describe this wine it would be savory. Roses, red cherries and geraniums on the nose with lots of deep red fruit and sparks of black pepper and cinnamon followed by crunchy minerality. Unique yet reminiscent of the best of the local Nebbiolo based Barbaresco and Barolo. And have I mentioned the price? $25. Never easy to source so this may be the last available for awhile. 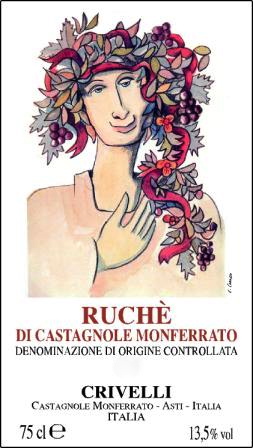 Most Loire aficionados would agree that this small domaine is the top address in Bourgueil and here we have their rarest cuvée and indeed one of the toughest tickets in the Loire Valley; Bourgueil Franc de Pied 2011. We offered a handful of Breton 2011’s earlier this past summer but we weren’t able to offer this one to you since it wasn’t offered to us. Fortunately, a few cases have found their way to us out of a miniscule California allocation we weren’t expecting. We should all be pleased. The Breton Bourgueil Franc de Pied is made from the fruit of ungrafted vines, known here as franc de pied, naturally, from a tiny .17 hectare, biodynamically farmed plot in Breton's Les Galichets vineyard. I’m surprised that this is even legal in Europe as these vines are susceptible to the dreaded phylloxera, and who wants to invite that into your vineyards? In fact, fellow Loire producer Charles Joguet made a similar cuvée in Chinon with ungrafted vines, the Varennes de Grand Clos Franc de Pied, which succumbed to phylloxera in the 2006 vintage after about 20 years. The Bretons are happy to report that their vines are still healthy though Pierre Breton notes that phylloxera deosn't seem to affect local ungrafted vines until they're at least 20 years old. He fully expects this 12 year old parcel to be overrun by this pest eventually at which point he'll replant back over to American rootstock.

The soil in this parcel is fairly sandy which is helpful in staving off this voracious vine pest but it’s probably just a matter of time. It’s only natural to question why anyone would risk planting these doomed vines and I can only say that tasting is believing. An A/B tasting with the Les Galichets bottling made from grafted vines in the same vineyard reveals much. The Franc de Pied just seems to have more of everything: color, volume, richness, profound aromatics and length. Classic Loire cab franc notes of red berry, tobacco and other leafy notes with deep red and black fruit flavors. Finishes long with notes of char and chalk. A good candidate for the cellar but difficult to keep your hands off of now. This is The most interesting Loire wine, red or white, we’ll be offering all year.